The School of Economics and Finance was established in 2014 through a merger of the Departments of Economics Theory, Accounting and Auditing, Economic Modelling, and Financial Management. The School is headed by Tatiana Bukina.

The aim of the School is to create and develop a community of academics and professional practitioners from the fields of theoretical and applied economics, corporate finance and financial markets.

Book chapter
Public–private partnerships in an economist’s eye: a gleam or a beam?

In bk.: A Research Agenda for Public–Private Partnerships and the Governance of Infrastructure. Edward Elgar Publishing, 2022. Ch. 4. P. 85-104.

International Conference on the Economics of Football

On May 29–31, the III International Conference on the Economics of Football, jointly organized by NES, the Higher School of Economics and the Khazar University, was held in Baku (Azerbaijan).

The conference venue was not chosen by chance; the final of the Europa League Chelsea - Arsenal was held on the same dates in Baku. The conference left Russia for the first time - the previous two also took place during major football tournaments: in 2017 in Kazan during the Confederations Cup, in 2018 in St. Petersburg during the World Cup.A distinctive feature of the conference has traditionally been the opportunity for young scientists to speak with recognized experts in football and economics. Along with prominent experts, young scientists from NES, HSE, Khazar University, Moscow State University named after M.V. Lomonosova, Financial University under the Government of the Russian Federation, University of Reading, Ca 'Foscari University in Venice, Azerbaijan Diplomatic Academy, Azerbaijan State University of Economics and others.
The conference program consisted of seven sessions dedicated to economics and football: “Labor Market”, “Mega-Events”, “Finance”, “Development”, “Performance”, “Demand for Football”, “Organizational Issues”.
The conference was opened by the leaders of the Khazar University, representatives of the Association of Football Federations of Azerbaijan, NES President Professor Shlomo Weber 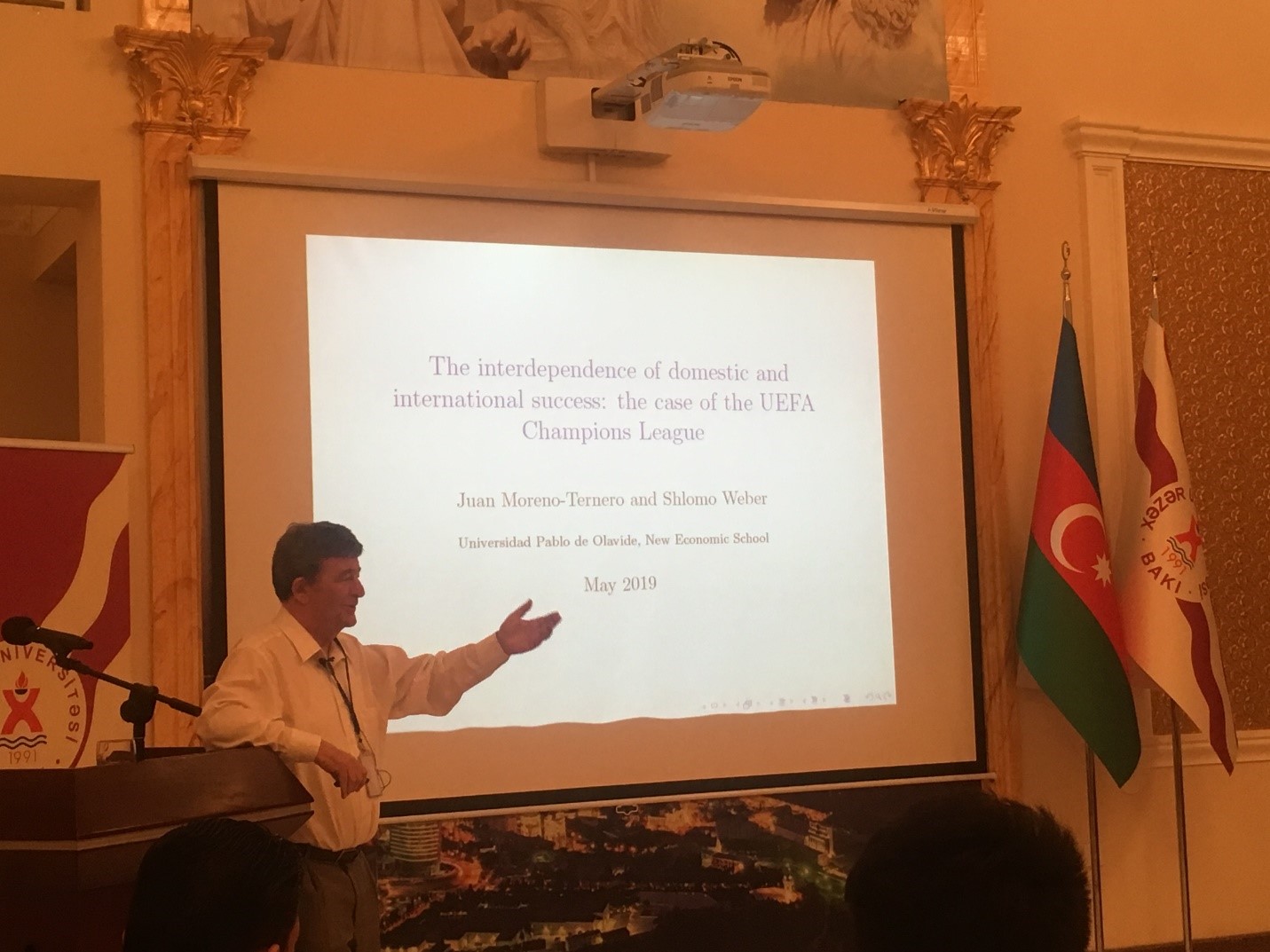 and Deputy Vice Rector of the Higher School of Economics, Head of the Lab on Sports Studies, Associate Professor Dmitry Dagaev. 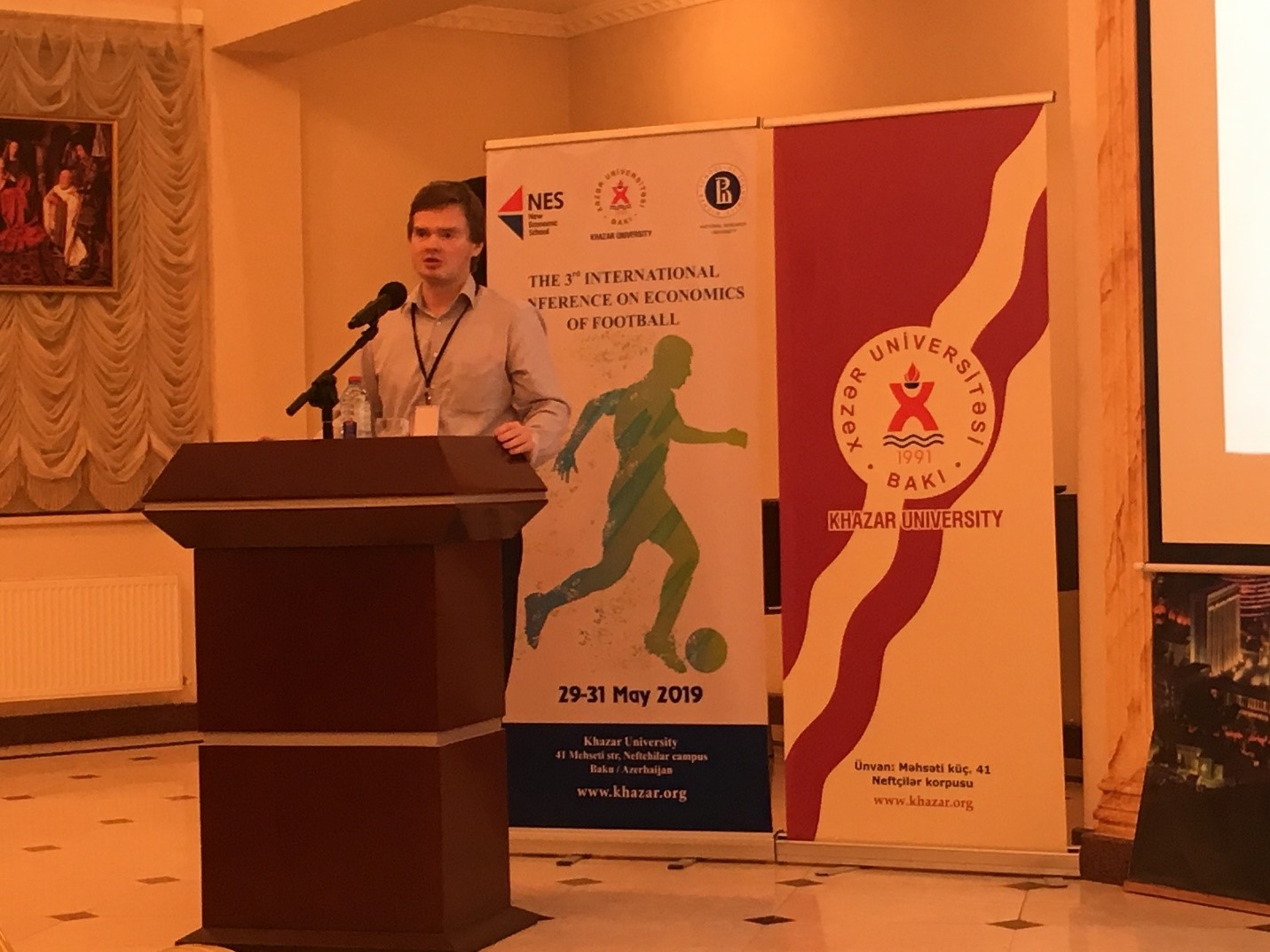 Dennis Coates, a professor of economics at the University of Maryland, introduced students to the political and economic features of major football events and asked, “What kind of competitions do we call mega events?” By what criteria can they be determined? ”The professor gave a list of measurable and immeasurable indicators that are influenced by a major competition, touched on what happens after the competition, and suggested several directions for further research: measuring the relationship between tourism and national GDP, long-term the impact on tourist flows and the effects of short, but relatively large competitions (such as the Europa League final).

Anna Bykova introduced the audience to the results of her study, conducted by a certain expert with D. Coates, on the influence of institutional factors (various tax rates and labor market regulation at the state level) on the success of football clubs in the American League of MLS. In the future, Anna plans to conduct a similar study for the Russian Premier League. 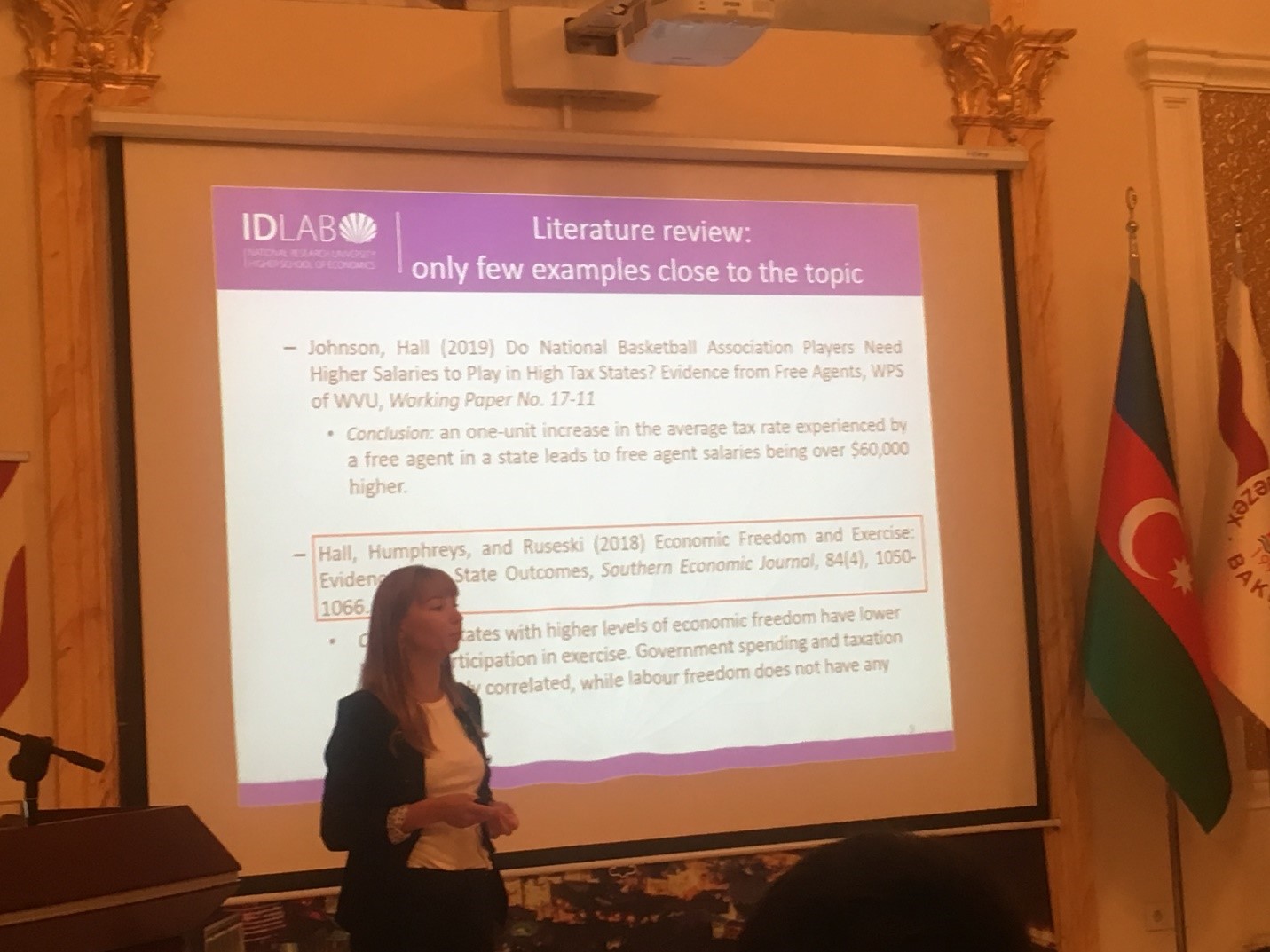 Peter Parshakov presented the results of a joint work with Elena Shakina on the impact of expectations from a player on his results. Interestingly, people who face high expectations may subsequently suffer from them. This situation is characteristic not only for sports, it was studied in a general context, in particular, it is a very popular topic in psychology. On the one hand, employees who have high expectations can make more efforts to complete the task and, therefore, demonstrate better performance. This is called the Pygmalion effect. On the other hand, high expectations put pressure. Preliminary results of the work demonstrate the negative impact of high productivity expectations, refuting the hypothesis of the presence of the Pygmalion effect.

Yulia Naydenova and Sofia Paklina in the report "The impact of mega-events on international image of a hosting country: the 2018 FIFA World Cup in Russia" talked about the results of the analysis of the impact of large events such as the World Cup on the country's image in foreign countries MASS MEDIA. Using sentimental analysis methods, the tone of publications about Russia was determined before, during and after the 2018 FIFA World Cup. Preliminary results of the study show that during the tournament, the tone of publications has improved significantly. However, the effect has a short-term nature, and after the end of the championship the tone of publications returned to its previous level. At the same time, the tonality of publications in foreign media affects the formation of Russia's image among the population of another country and the level of inbound tourism.

The conference also presented a lot of interesting studies on the economics of football, prepared by young scientists, on topics such as “Moneyball in football”, “The impact of the high cost of acquiring a football player on the performance of his speech”, “The impact of major competitions on the image of the host”, “Influence of football tourism on the economies of countries ”,“ The impact of head coaches on the sports results of clubs in the Champions League ”,“ The impact of a complex calendar on the results of teams ”,“ Do football players play better against their former clubs? ”,“ The influence of HR function on club results ”and others.
This was the third conference on the economics of football organized by NES and the HSE. The unforgettable event was given by the beauty of the beautiful city of Baku and a visit to the fascinating finals of the Europa League. It was cool! We look forward to continuing next year. 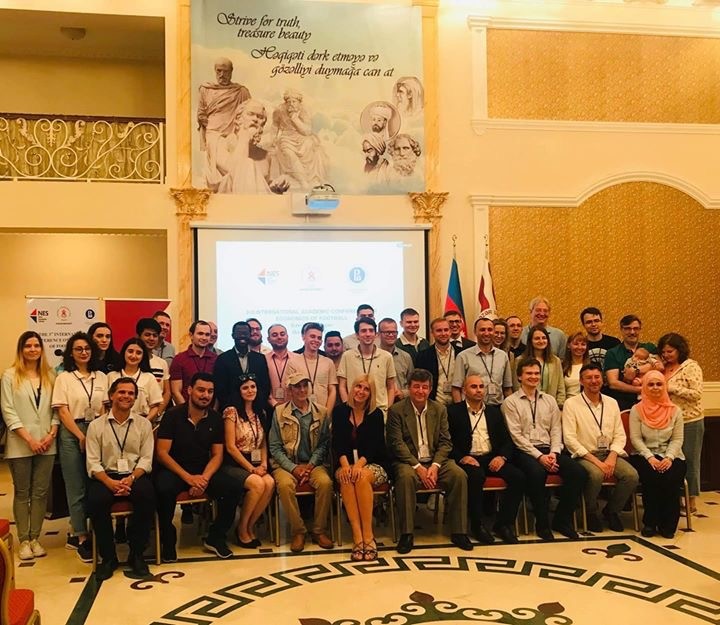 We used the sports blog of V.Ageev in order to prepare the news: http://www.sportdiplom.ru/blogs/vladimir-ageev/3-d-international-conference-economics-football-cht-06062019-1012?fbclid=IwAR3-igrALbcg4RroR7TVndT7HPFYxhbLVaEBRMTmP7NcQzMRfaGhAlfKJOE

June 07, 2019
About
School of Economics and Finance